From the website  GreatMirror.com, a picture of a very unknown soldier, Miss Edith Alberta Burke, a missionary in China, Egypt and Sudan.

The website notes “Khartoum has a Commonwealth War Graves cemetery, as well as a civilian one. Here, the tombstone of one very late missionary, part of an army not well regarded nowadays but perhaps overdue for a reappraisal." 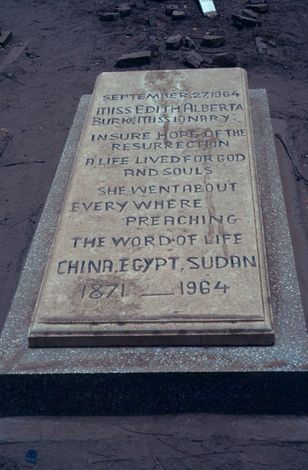 Miss Burke died at the age of 93, and, despite lots of research, I’ve not been able to find out anything about her.

But that same day, the Warren Commission issued its report saying that President John F. Kennedy was killed by one man, Lee Harvey Oswald.

The day before (Sept.26) Gilligan’s Island had premiered.

The day after her death, Harpo Marx died.

Which event do you think registered more attention in Heaven?

This is only a preview. Your comment has not yet been posted.

The letters and numbers you entered did not match the image. Please try again.

As a final step before posting your comment, enter the letters and numbers you see in the image below. This prevents automated programs from posting comments.

Having trouble reading this image? View an alternate.

(Name and email address are required. Email address will not be displayed with the comment.)