Being Human, as imagined by a non-human

In the Star Trek franchise, specifically the Next Generation series, there’s an android character named Data. Through the whole series, his (Data’s chosen pronoun) goal is to become human. His character develops or displays many human traits, such as loyalty, love, curiosity, etc.

In one Star Trek movie, he is offered the ability to have human skin, and human sensations. He says he was “tempted” by the offer, for about .068 seconds, “an eternity for an android”.

It’s interesting that Data was tempted, that is, that someone tried to tempt him at all. This is no doubt intended to show some more ways that he is at least partly human.

At one point, (avoiding a spoiler), there’s another “Data” being reconstructed from, um, spare parts. Start the cycle over again – reincarnation?

The thing about SciFi is that it can wobble in its ‘core beliefs’; it’s universe of ideas can be fuzzy at times, perhaps counting on the short memory of its readers/viewers, or perhaps suggesting an “evolution” of its ideas. Believe in anything, whatever makes you feel good at the moment, whatever is ‘useful’ for the story.

I used to love SciFi until the day I finally realized it was based on secular humanism – specifically that mankind’s great brains and iron resolve can solve all its problems.

Well, not quite. In every SciFi story, there is at least one human flaw – usually greed or the hunger for power over others – that gets in the way of, well, “perfection”. That makes for a more interesting story – conflict, and the need (again) for the good qualities of people to overcome their obvious flaws – but it destroys the concept of human perfection. These characters aren’t quite there yet.

Data is exceedingly strong. His brain is lightning fast. He is impervious to many of the fanciful SciFi ‘radiations’. If damaged (injured) he can be somewhat easily fixed (cured). All goals that humans have.

But he is tempted, tempted to betray his friends and the principles he holds – in this case, duty, honor, self-sacrifice for others – for the ‘pleasures of the flesh’.

He is thus, human.

And “who will deliver me from this body of death?”

The Apostle Paul said “Thanks be to God through Jesus Christ our Lord”.

Being a Manly Man

Manliness seems like a silly subject, studying it seems almost self-defeating, like bragging about how humble you are. You either are or you aren’t, if you have to talk about it, think about it, maybe you aren’t.

But if you expand the scope of the idea, you may be on to something. That is, define manliness as things a man is expected to know how to do, not just be, then it might be worth studying.

(Note: If you want a more thoughtful discussion, I highly recommend Wild at Heart by John Eldredge. I'm just having some fun here. )

It used to be that a boy learned manliness from his dad, from listening to, responding to, but mostly just by watching his own father. Sometimes the other men in his life, uncles, grandfathers, the coach, the pastor, would fill in, add to the fundamentals.

Those fundamentals were sometimes profound: treat elders with respect, never think of hurting a woman, be responsible for your own stuff. But sometimes they were more elementary: how to tie a tie, how to change a tire, how to start a fire, how to talk to a woman on the first date. (No kidding, try those links.)

The website The Art of Manliness is working on finding that balance between the fundamental and the elementary.

Recently they published “16 Ways to Become a Better Man in the New Year” (Get an alarm clock, read a book a week, Call your mom once a week, Fast one day a month, etc.).

Another great set of pages - Riddles, and Jokes for Little Kids:

“Why do fish live in saltwater?”
Because pepper makes them sneeze!
“Why are giraffes necks so long?”
Because they have really smelly feet!"

And then there's  Knock Knock jokes for kids:

“Knock, knock
Who’s there?
Hatch
Hatch who?
God bless you!”

There’s even some Cool Uncle Tricks, like How to Bounce a Dinner Roll (off the floor, supposedly).

Not too long ago, how to roll up your sleeves, probably something you never thought about. Tons of how-to's on weight-lifting and exercise.

I recommend signing up for the weekly newsletter. There’s some fun stuff and serious stuff, and just getting the email reminds me to think about things like this. Last week’s edition featured Creating a First Aid Kit, an article about packing Survival Food, the above mentioned “Be a Better Man” article, and a quick pic of a Dopp Kit (origin of the term here): 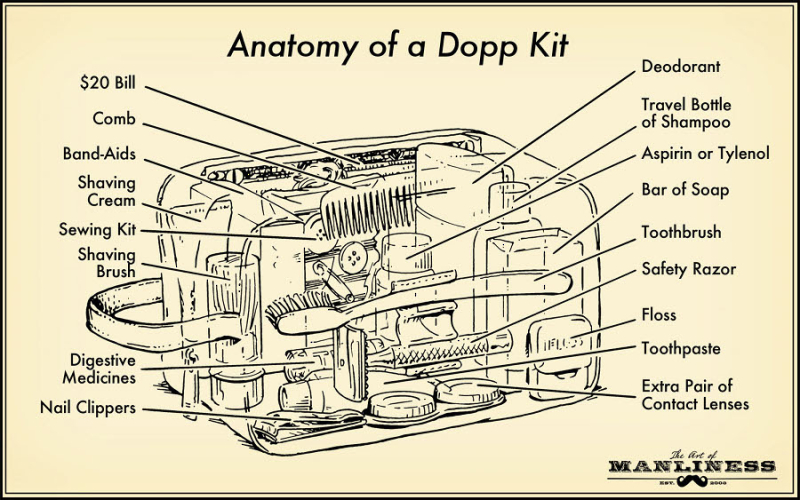